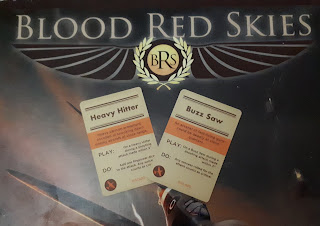 Sooner or later if you are doing it right, or at least in my case get lucky, you get an opponent in your sights. So lets take a look at gunnery related Traits in Blood Red Skies.

There are two obvious traits to consider, and one less so, plus a couple of Traits that are associated with attacking ground targets only. Let's look at the obvious ones first, Heavy Hitter and Buzz Saw.

Heavy Hitter (HH) is there for planes that have a bigger than average punch, either because they have large calibre guns, or guns that are all concentrated on the centre line. Examples of bigger guns would be the 30mm Mk108 on some German fighters such as the fearsome Me262 , or the NS 37mm on some Yaks. It does NOT include specialist anti tank guns suck as the Vickers S mounted on a Hurricane IID which we will come to a bit later. Centre line gun batteries can also benefit from the HH trait because they don't need harmonising like wing mounts and tend to be able to deliver more concentrated fire - an example of this would be an Me110 or a Mosquito. Lastly the four gun Hispano mounts on some later British fighters such as Hurricane IIC, Typhoon and Tempest also get HH. The Trait itself is not dependent on the number of guns or the firepower rating of the plane - you can get FP 1 HH if you have only a single or couple of guns, one of which is a monster.

So that's what it is - what does it do? HH only works when shooting at 3" or less. At that range it adds a firepower dice, and crucially, any hits that it causes are critical hits. HH is a "discard" so it keeps recycling through your deck. The real bonus with HH comes with the new "deflection shots need a crit" optional rule because with HH all hits from 3" are automatically Critical Hits - ok the opponent may well dodge them still, but the chance of getting the initial hit, and therefore inflicting the Boom Chit, is dramatically increased.

There are also some Doctrines that have HH as a Bonus. First up is Opening Shot. This isn't a widely used option - I think partly because it comes from Mig Alley, and is restricted to the late war Soviets. It allows you to take a shot from double normal range, but you only roll your FP value NOT FP+Pilot Skill. It is only available as a pilot action shot, so is a bit restricted, and HH doesn't really add anything to the attack as it will happen from outside the 3" range of HH. Then again if you happen to have an NS37 cannon firing shells the size of milk bottles, well it would be rude not to.

Next up is Head on Attack. When you get a Critical hit in a head to head against a multi engine plane it is applied directly to the target - so instead of dropping an advantage level, they immediately take damage no matter what advantage status they are in - it is very situational, but if your job is hitting bombers, it is a very useful doctrine to take.

Last is Big Game Hunters. This one is very specialised, only kicking in when firing at disadvantaged multi engine targets, but if you get a crit you apply 2 Booms to the target - ie shoot out 2 engines. This will immediately cause twins, including Agile ones (!) to crash. I suspect it is designed to represent the special tactics used to target vulnerable areas on heavy bombers, but it actually works better on Agile fighters.

The second shooting Trait is Buzz Saw. This is another MiG Alley card but it may possibly work its way back into some WW2 releases. It represents the big batteries of heavy machine guns on centre line mounts such as on the F80 and F86. It operates exactly like Heavy Hitter but does not grant the plus 1 FP dice, so the comments that apply to HH also apply here. There are no Bonus Doctrines (yet) that use Buzz Saw, but there may be some along soon.

One quite major implication of these cards is when you are strafing ground targets, particularly those that have qualities that reduce either the number of dice rolled when strafing, or the number of hits caused. As a Critical hit causes 2 point hits on a target, and when in effect both HH and Buzz Saw cause any hits to be criticals, they will chew up ground targets pretty well. This makes planes with either of these traits good at strafing targets with the Dispersed quality, and also help a little when hitting Armoured ground targets.

Speaking of armoured targets. The other Trait that involves shooting is Can Opener. This is a specialist ground attack trait that represents those aircraft with anti tank cannons and specialist ammunition, such as the HS129 or Hurricane IID. These planes tend to have very limited actual firepower as they were awful in air to air combat, but as they negate the Armoured value of ground targets they are good at killing tanks. The problem with these types is they are over specialised, and the opportunities to use their specialist equipment was relatively rare so that everyone moved away to a more generic and versatile fighter-bomber. Can Opener (and the Hurricane IID and Hs129 data cards) are only available via the "Sandstorm" pdf  downloadable for free from the  Warlord website.

So that is part 3 - next up will be traits that impact your survival - such as  Robust, and Armoured.

Renko
I'm a historical wargamer with a tendency to dabble in sci fi and the like. Pretty much a "simulation not a game" rivet counting trackhead but no-one is perfect